According to Barclays the extent of the current down-cycle in oil and copper prices matches previous past experience, however any significant move up in prices from current levels might be premature and difficult to sustain, at least in the short term. In previous cycles both oil and copper have spent far longer trading at depressed levels than they have so far this time around.

Relative to their rolling five-year averages, monthly prices in September were down by 31% and 51% respectively for copper and oil. That compares with an average maximum decline of 36% for copper and 45% for oil relative to five-year averages during each of the last three major economic downturns of the past 35 years (the 1980s global economic slump, the late 1990s Asian economic crisis and the 2008 financial crisis). Bear in mind that this research was published in late October so it doesn’t capture the recent weakness in copper prices. 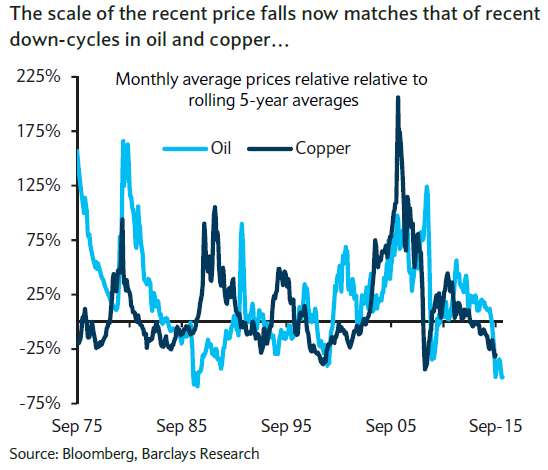 However, higher for longer implies lower for longer too. Defining “bumping along the bottom” as a sustained period where prices trade at 20% or more below their prevailing five-year average, then copper at nine months so far compared to an average of 15 months in previous cycles, and oil at 11 months compared to its historical average of 19, would both be performing much better than in any recent cycles were a sustainable recovery to take root any time soon. 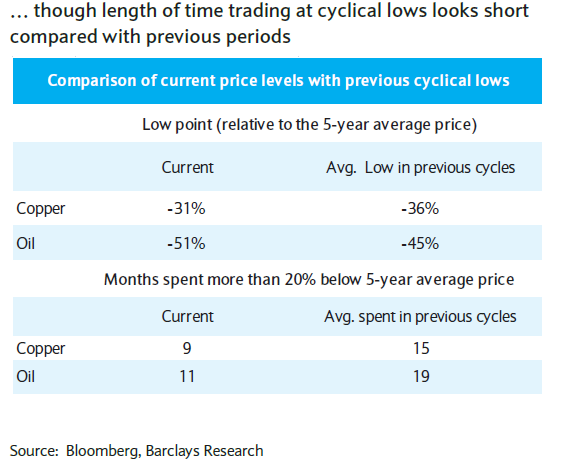