Some interesting comments from Antoine Halff, from the International Energy Agency (IEA) on how the shale boom in the US has changed oil-producing nations perceptions of scarcity and their ability to negotiate (read impose) better terms for them with oil companies.

In an interview with Bloomberg he said “Back in 2008, we were at the peak of a cycle of resource nationalism among producing countries. Now we’re in a completely different situation, where some of the very same countries that had indulged in resource nationalism are back-pedaling, and making their investment terms more attractive to foreign companies,” Going on to say “Many countries feel threatened by the unconventional revolution in the U.S. There’s competition for investment, competition for technology.”

This view contrasts with those expressed by Dambisa Moyo (author of Winner take all: China’s race for resources and what it means for the world) who believes that the slowing growth in some emerging markets will be one of the main drivers of government action towards resource nationalism, fearing that “…we will continue to see much more talk and much more action around natural resources in the years to come.”

And despite the apparent correlation between resource disputes and crude prices depicted in the chart below Jaakko Kooroshy from Chatham House believes that “…conflicts with governments will not disappear because prices have fallen. Governments will continue to look to get a good deal, and where they feel they’re not getting that…they may act on this.” 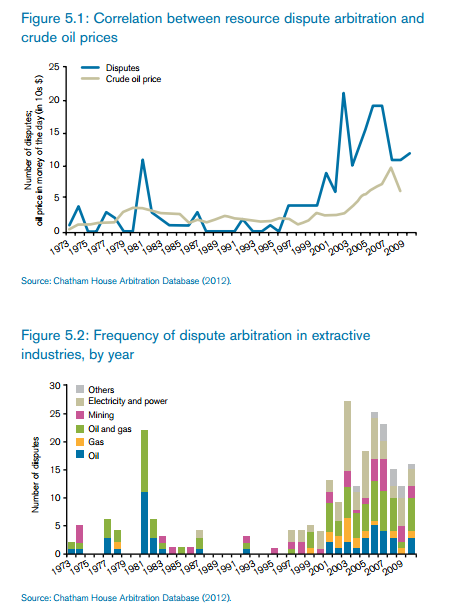