Amid the endless speculation over when the Fed will finally raise interest rates, Janet Yellen, the Fed chair appears almost certain to raise rates when the policy-setting Federal Open Markets Committee next meets on 16 December. The impact on every other asset has also been pored over for months with previous examples of rate hikes scrutinised for clues as to what could happen.

In theory at last tighter monetary policy increases the cost of storing commodities and thereby decreases the demand to hold them, acts as a disincentive to invest in risky assets, encourages commodity extraction by increasing the value of monetising undeveloped commodity resources and finally by being transmitted into a stronger US dollar. All of which should mean lower commodity prices.

However, the evidence from the period after interest rate hikes in 1976, 1986, 1994 and 2004 is the opposite. On average overall commodity prices rose by 20% in the first year after monetary policy tightening began with industrial commodities posting the highest gains. 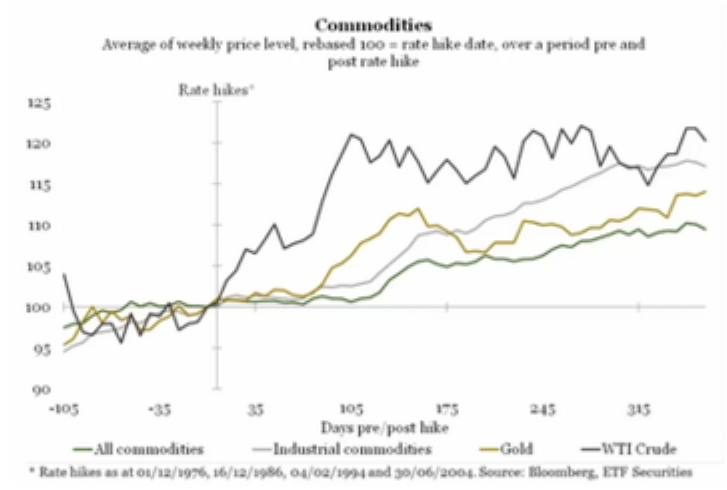 Average performance can hide lots of crucial details however. Take the effect of higher rates on the US dollar. Higher interest rates rates don’t always lead to a stronger US dollar. In turn the impact on commodity prices is not uniform. Some are more exposed to changes in the US dollar (internationally traded commodities) but also their relationship changes too. For example, WTI crude has been highly negatively correlated with the US dollar since 2000, but was positively correlated with it in the 20 years prior. 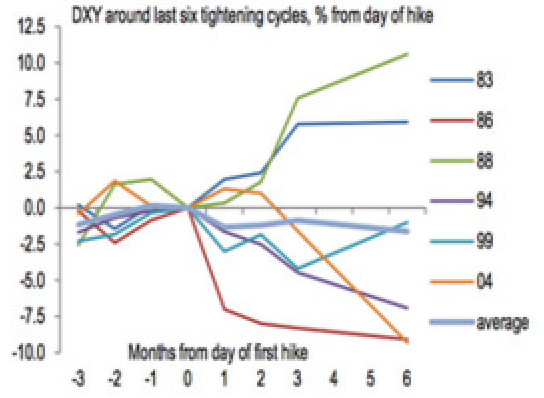 But while theory and history can provide clues they don’t provide the whole answer. First, currents events are quite obviously different. The Fed’s overriding objective is to lift inflation and ensure that it remains above 2%. To do this, Yellen will have to keep interest rates very low, even after inflation starts rising, just as her predecessor Paul Volcker had to keep interest rates in the 1980s very high, even after inflation started falling. Janet Yellen has repeatedly said that the impending sequence of rate hikes will be much slower than previous monetary cycles, and predicts that it will end at a lower peak level.

Furthermore as Anatole Kaletsky highlights, no one will be surprised if interest rates go up in December.

The imminent US rate hike is perhaps the most predictable, and predicted, event in economic history. Nobody will be caught unawares if the Fed acts next month, as many investors were in February 1994 and June 2004, the only previous occasions remotely comparable to the current one.

Commodities traditional role as an inflation hedge is also an important factor to consider. Indeed, commodities have tended to deliver higher returns than other assets late in the business cycles, where we are now, where in previous cycles inflation was rearing its ugly head. 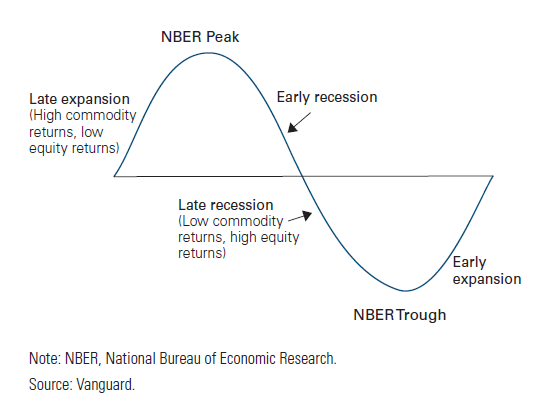 Things are different. Indeed, even the timing of the first hike appears to be much later in the business cycle than earlier examples…