A deadly mudslide that killed hundreds of people in Colombia earlier this month may portend the spread of more extreme weather conditions. Local weather forecasters have blamed the wet weather that has hit the region on the weather phenomenon known as El Niño.

First observed in the 19th century by Peruvian fishermen, the recurring weather phenomenon is known to affect Australasia as well South America. Its climatic effects can reach as far as West Africa triggering downpours or droughts. Previous episodes have had a significant impact on crop yields and the price of agricultural commodities as well as metal and energy prices.

According to the Australian Bureau of Meteorology six of the eight models that it tracks suggest that an El Niño may develop in July. South Africa’s weather service and global forecasters agree, predicting that El Nino will form again in the southern hemisphere winter or spring, which falls between July and September. El Niño events tend to develop between April and June and reach their maximum strength during December and February. According to Columbia University conditions usually persist for 9-12 months, but can occasionally last for up to two years.

Should El Niño return, it will be the first time the Pacific has swung from warm to cool and back again over a three-year span since the early 1960s. The reason weather forecasters are so concerned is that sea temperatures off the coast of Peru have warmed significantly in recent weeks. This has brought heavy rain to the region, but also means that as the sea currents spread west it will result in a warming of the Pacific Ocean, increasing the risk of an El Niño developing.

Two factors, in addition to its severity, will influence the impact that El Niño will have on crop yields and prices. The first is the timing of El Niño event. The impact of which will vary depending on what stage of a crop’s lifecycle (e.g. sowing, growing, harvesting) it occurs at. As the two maps below illustrate the impact of El Niño varies considerably depending on whether it occurs during the summer or winter months (see maps below). The current outlook suggests that if it does occur El Niño will reach its maximum strength towards the end of 2017 – figure 2 below.

Coffee – The warm weather that El Niño brings in June to August aids the Arabica coffee harvest as the crop solidifies and warmer weather protects against the spread of the roya fungus (which thrives in wetter conditions). However, drier El Niño weather in December to February may have negative impacts on the next Arabica crop, helping to support coffee prices as the event continues.

Cocoa – Cocoa output has been volatile regardless of El Niño due to the majority of its production occurring in west Africa which has geopolitical, funding and energy issues.

Palm oil / soybeans – This is perhaps the crop with the biggest exposure to El Niño on account of 90% of production occurring in Indonesia and Malaysia. Whilst palm oil plants are fairly resilient during an event, dry weather tends to impact production growth and yield trends in the following 12 months. Though any increase in palm oil prices tends to be capped by increased soybean production, as palm oil is substituted by soy oil.

Sugar – El Niño’s impacts on sugar production are greatest when it brings too much rain to Brazil and drought to India (which, together, produce 38% of the world’s sugar). India’s sugar production is for its domestic market as it has the highest per capita sugar consumption in the world (consuming 15% of the world’s sugar). In Brazil, El Niño means fewer days for crushing and causes lower sugar content in the cane as the wet conditions cause the plant to store less sugar.

Perhaps surprisingly though the commodity that has typically seen the biggest impact on price during the 20 year period to 2015 has been nickel. This has been because dry weather in Indonesia (up until recently one of the main exporters of nickel ore) lowered the water levels in canals, preventing the metal from being exported.

Other metals may also be impacted by the arrival of adverse weather. In Peru for example heavy rains have flooded zinc mines in the past triggering price spikes. Gold demand may also be hit if a weak monsoon results in a poor harvest. Indian farmers are large buyers of gold and so any fall in their incomes could hit purchases of the precious metal.

Globalisation of markets and trade should, all else being equal, diminish the impact of any region-specific decline in output. For this reason grains such as wheat and corn tend not to see a significant weather related impact on yields from El Niño. That being said, regional weather conditions may still result in prices responding violently to a perceived or actual threat to output.

Finally, El Niño also reduces the risk of hurricanes in the US Gulf. El Niño increases wind shear in the Atlantic, acting as a block to tropical storms from forming. As hurricane activity has subsided in recent years the typical seasonal bounce in crude prices in late September/October has been much less pronounced.

Historically El Niño creates a risk premium for many commodities that tends to be reflected in prices and volatility. But crucially for investors and physical commodity traders this tends to happen only once an event is underway.

Developments in commodity trading have the potential to spark market disruptions and higher commodity price volatility according to a report from Oliver Wyman. The report “The Dawn of a New Order in Commodity Trading – Act III” highlights the risk that changes in the commodity trading environment could have for both producers and consumers of commodities as well as an opportunity for investors.

This process has a number of benefits for consumers, mainly smoothing out supply and demand imbalances that could otherwise cause a supply disruption or increased commodity price volatility. To illustrate their importance for commodity supply chains the leading independent energy trading houses – Vitol, Glencore, Trafigura, Mercuria and Gunvor together handle more than enough oil to meet the import needs of the US, China and Japan. Agriculture is similar with ADM, Bunge, Cargill and Dreyfus thought to handle about half of the world’s grain and soybeans trade flows while Glencore and Trafigura controls as much as 60% of some markets, such as zinc.

However, the report notes a number of trends which if they coincide could introduce more uncertainty into many commodity markets and increase the risk of disruption. Commodity markets are maturing and becoming more efficient reducing the margins available to intermediaries. Taken together with the exit of many of the worlds largest Western investment banks from commodity trading has meant that commodity trading is likely to become more homogenous. Companies will only operate in those markets where they can create significant value from their existing positions, e.g. large commodity producers, such as oil majors and national oil companies, are increasingly establishing trading activities so that they can monetize their upstream production and gain greater control over their value chains.

In order to compete in this new world many of the independent traders have been loading up on debt to secure physical assets. This has caught the attention of rating agencies and increased their cost of capital, reducing the incentive for them to make volumes of inventory readily available to head off supply disruptions. Traders are also abandoning some markets or reducing their activities, resulting in less available liquidity for hedging products. Ultimately this could mean that commodity prices will be more vulnerable to sudden disruptions than they have been and fewer tools available for businesses to help manage the risk of disruption and volatile prices.

Related article: Is food price volatility about to return with a vengeance?

Materials Risk has discussed the decline in commodity price volatility (and in oil prices in particular) a number of times over the past couple years. Macro factors such as monetary easing have helped with lower interest rates increasing the incentive to store commodities which, in turn increases the shock absorbing effect on prices. The oil market has been particularly interesting since despite the plethora of geopolitical concerns and significant supply outages oil prices have traded in a narrow range. A new chart from Bank of America Merrill Lynch shows that despite the interruptions to supply overall volatility in oil production growth has fallen to historic lows, suggesting that this may have been the main micro factor in dampening oil price volatility. 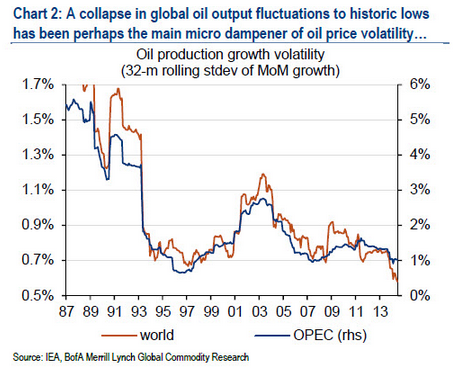 BofA Merrill Lynch go on to highlight the close relationship between conflict in energy producing countries (here measured by war casualties) and oil output. With war casualties in energy producing countries rising sharply in the past couple years they argue that this is likely to lead to more oil production outages in the future. However when you compare the chart of oil production volatility and the one below showing oil price volatility there appears to be little connection between the two. Oil production was significantly more volatile during the 1980’s and early 1990’s yet volatility remained low. While more recent spikes in oil price volatility are likely to have been caused by demand uncertainty as a result of the financial crisis than fluctuations in oil production (see more of BofA’s charts here). 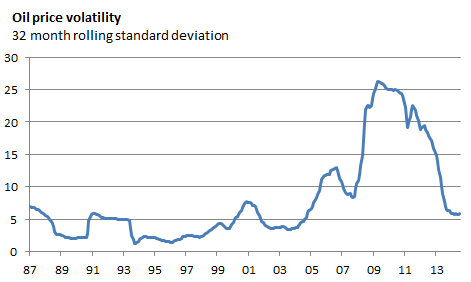 Related article: Is food price volatility about to return with a vengeance?