Attention on the prospect of an escalation in the ‘currency war’ as economies seek to devalue their currencies hoping to gain a competitive advantage has tended to focus on the potential gains that exporters may reap. However, there is a flip side for economies devaluing their currencies and for manufacturers in particular. A decline in a currency simultaneously increases the cost of imports. If a manufacturer needs to import commodities and/or sub components its input costs may increase significantly if its currency devalues, irrespective of the underlying fundamentals of the commodity concerned.

The chart below from HSBC highlights those currencies most and least active in the so-called currency war. Japan has been one of the most active economy in managing its currency. 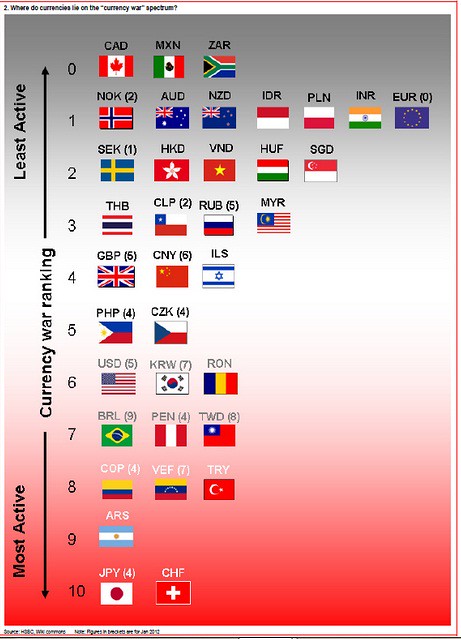 The yen fell towards its lowest level against the US Dollar for 33 months this week as Japan’s prime minister signaled that there would be no change to the country’s ultra loose monetary policy. The most recent Markit PMI data from Japanese manufacturers revealed that despite lower buying activity input prices rose in December, the first increase since April 2012.

For manufacturers outside Japan, further down the supply chain and which depend on the import of refined components, the decline in the yen may also lower costs. For example, the Hong Kong watch industry is the worlds largest importer of assembled moving parts, 57% of which and comprising 30% of total production costs, come from Japan.

In contrast to commodity price changes and their affect on input costs, exchange rate fluctuations are much more transparent to buyers further down the supply chain, buyers who may anticipate changes in a manufacturers input costs in their negotiations.