Forbes magazine notes that the 65% rise in the Baltic Dry Index (a measure of the cost of shipping coal, iron ore and other dry cargoes) since the start of the year could be a sign that commodity prices are due a turnaround. They note the following as the reason for the rise.

The prime reason for the increase in the cost of renting a ton bulk carrier of the sort that plies the route between Brazil and China, or Australia and Japan, is that forward orders for iron ore and coal have risen after a depressing start to 2013. Secondary reasons for the rise are that the five tough years after 2008 saw several ship owners collapse, and with those failures came a sharp decline in orders for new ships which means a shortage of bulk carriers could emerge in the next few years. 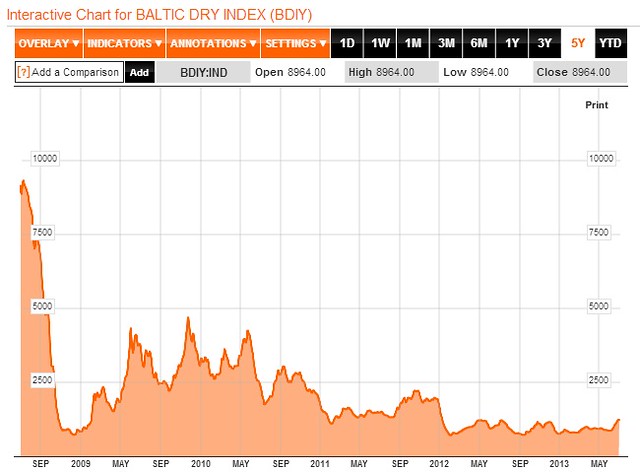 Despite being touted every so often as an early indicator of an emerging economic trend its performed very badly over the past five years. Indeed its important to remember what exactly the Baltic Dry Index is. See this excellent explanation from Business Insider.

Why do shipping rates seem to jump all over the place? Due to near-term supply of ships versus demand for commodities. Its just a matter of bottleneck problems. If rates go up it can come from either of two things: not enough ships at the time or too much commodities demand at the time. In a situation where ship owners match demand, which over the long run they will, then rates won’t skyrocket and will just track their costs plus some margin for their effort.

Imagine you have 10 loads of iron ore and 9 ships, and that every load of iron ore must be sent no matter what while every ship must be filled no matter what. Imagine the bidding war between those 10 iron ore consumers fighting over just 9 ships. Shipping costs would skyrocket since they all need to ship regardless of cost. Now imagine if a week later two more ships enter the market. Now imagine the bidding process. Suddenly the tables have completely changed. You have 11 ships, that all need to be filled no matter what, and only 10 loads of ore. Shipping rates would plunge, despite a period of just a week passing by. This is, in a simplified nutshell why the BDI is so volatile.

Now, add to this the fact that predicting ship supply and commodities demand has a pretty high margin of error, at the same time remembering how sensitive the BDI is to small mismatches due to the inelastic nature of its underlying supply and demand, and you quickly realize that predicting the BDI is a fool’s game and also that it is not a reliable forward indicator given that it is a spot rate index in a market where both sides are basically forced to close a deal due to high fixed costs. The BDI is a measure of supply/demand mismatch at the moment, and can change drastically on a dime. It’s little else beyond this. It hit its peak not when the global economy was in its healthiest state, but in early 2008 when things were already starting to come apart, but Chinese commodities demand growth still had some steam and just kept outstripping stagnant vessel supply growth. For a moment. And then it all collapsed.