Devastating floods that hit Thailand last October resulted in the shut-down of at least half the country’s hard disk drive (HDD) capacity, around a quarter of global capacity. HDD prices rocketed after the floods. A typical 1TB HDD increased from $60 to $160 in the immediate aftermath of the floods. 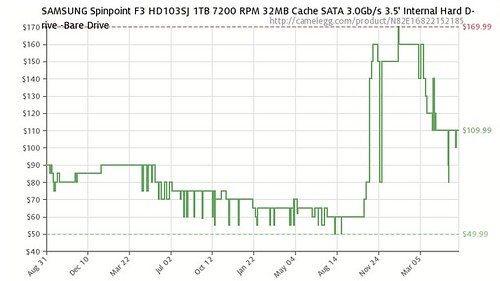 Despite reaching pre-flood levels HDD prices are expected to remain elevated as production is concentrated in the hands of a few large manufacturers. Two recent mega-mergers between Seagate/Samsung and Western Digital/Hitachi GST has resulted in the two top suppliers holding 85% of HDD market share in 2012Q1, up from 62% in 2011Q3.

HDD prices are down 30% from their peak but they remain almost double the pre-flood levels. Industry consultant IHS forecasts HDD prices will only fall to their pre-flood levels by 2014 prices, remaining at an elevated level in order to fund additional research and development into next-generation storage systems.

How are companies responding? Owing to concerns over HDD availability, an increasing number of PC manufacturers have signed long-term agreements with HDD makers. These agreements provide shipment guarantees, but lock in pricing that is approximately 20% higher than pre-flood levels.