According to The World Platinum Investment Council (WPIC) now is a good time to invest in platinum…well I guess they would say that. So what is the reason for why the WPIC (backed by platinum miners to promote the use of platinum) is so positive on the outlook for the metal right now?

As the FT reports “This is only the fourth period in … 40 years where platinum is at a sustained discount to gold. Investors are increasingly telling us that they view this divergence from historical norms as significant and temporary,” the council said.

Platinum prices are up over 19% since the start of 2016 with investors taking a shine to platinum and other precious metals as interest rates moved towards or below zero across much of the world and geopolitical concerns (Brexit, Trump etc.) escalated. While platinum prices have been supported by stronger investment demand they remain some 20%-25% below the price of gold (a discount which has been in place since November 2015). The main reason for the discount to gold being the emissions scandal involving Volkswagen. 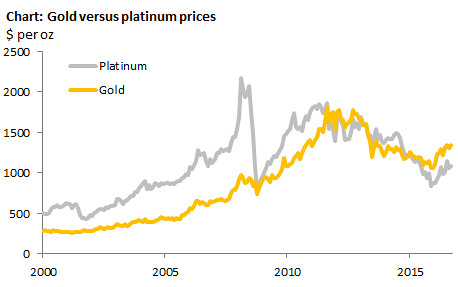 Uncertainty around demand for platinum has spiraled since the scandal, almost a year ago. If demand for diesel vehicles fell then so could demand for the platinum that is used to make the catalytic converter in diesel cars (about 40% of platinum demand comes from vehicles).

Although the longer term outlook for platinum looks murky (more on that in a minute), the next couple years at least look positive. First, the decline in the relative price of diesel versus petrol has increased demand for diesel cars. Second, Europe’s new emissions rules for 2017 will require more platinum use in diesel catalysts than currently takes place. Third, tighter regulations on emissions are spreading to off-road vehicles and power generators – trends which could further support increased demand for platinum. According to a recent presentation by Johnson Matthey automotive demand for platinum could rise 2% in 2016. 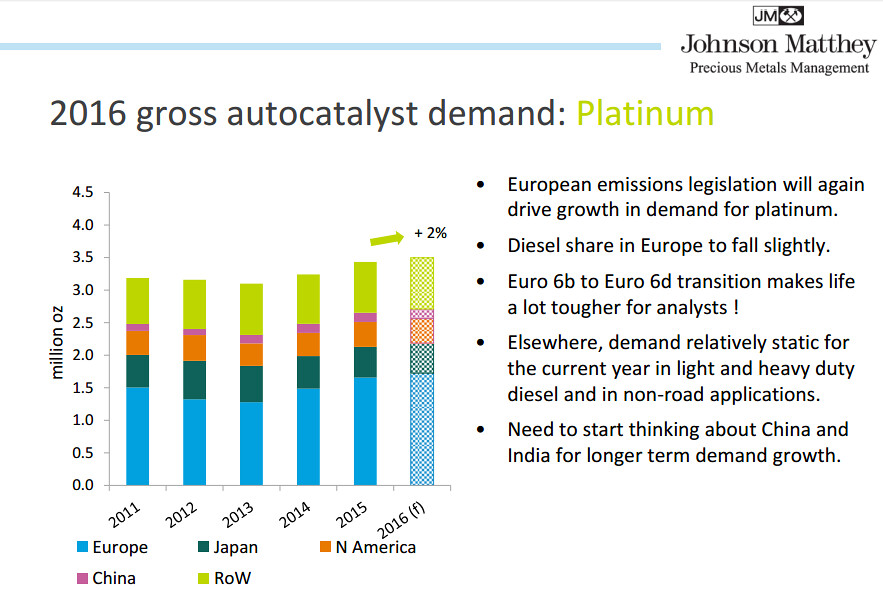 Further out towards 2020 things get a lot more challenging. Last week Renault voiced concerns that tougher standards and testing methods would increase technology costs to the point where diesel is forced out of the market. The car manufacturer expects diesel to disappear from most of its European cars. Total diesel car sales will plummet to 9% of the European market in 2030 from 52% today, AlixPartners predicted in June, with the decline accelerating after 2020.

I’ve talked about demand, but what about the supply side? Platinum mine supply is forecast to 3% this year according to Johnson Matthey with South Africa, the largest producer set to see declines. Around 80% of platinum mines in South Africa are thought to be unprofitable according to The Chamber of Mines. This financial pressure has resulted in thousands of jobs being cut, mines being sold and unprofitable mines being shutdown. In turn this has raised the risk of labour disputes, that until recently have had limited impact on prices. Meanwhile, the sharp drop in the South African rand has encouraged miners to sell more platinum abroad. 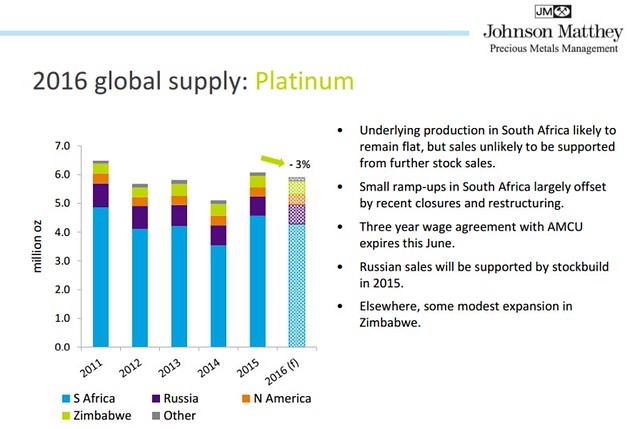 Recycling, by far the cheapest way to access platinum, has been boosted by the rebound in steel prices which has improved the economics of recovering platinum from used catalytic converters and boosted supply. According to Regarding Capital Management in Cape Town, South Africa recycling will probably be the biggest and lowest-cost producer of platinum in the next year or two. As stockpiles dwindle, recycling may become the new source of platinum that acts as a buffer to future imbalances in the market.


Its worth looking back to 2007/08 to see what caused platinum prices to spike in to over $2000 per oz to understand whether the same forces could be in play now.

In contrast to the bullish factors at play in the run-up to the 2008 boom there appear to be no such factors lurking around the corner with platinum. Remember, even though there is a big discount, from an historical perspective versus gold it doesn’t necessarily follow that platinum prices are primed to rise above gold to correct this. Gold prices could fall instead. And with interest rates potentially increasing in the US as early as this month, gold prices could fall soon.

(Visited 460 times, 4 visits today)
Materials Risk is all about empowering people to challenge consensus opinion and make better investment and business decisions. I do this by researching commodity markets and economics, learning from the mistakes of the past and spotting opportunities for the future. This all comes together through great content that educates, informs and entertains. Find out more in the About page and this article on why.
Materials Risk is a verified creator on the Brave Rewards platform. If you’d like to support Materials Risk please consider tipping some BAT. You can download the Brave web browser here.

Market quotes are powered by TradingView.com