Rabobank has  published new research on the global potash industry highlighting the potential for further price falls but that buyers need to keep a close eye on the long term as suppliers may be close to managing output more effectively providing a floor to prices. The outlook for potash prices is especially important for US farmers who are likely to be strong buyers of fertiliser as the spring planting season begins.

Since the 2007-08 food crisis potash prices jumped 10-fold to $873 per tonne as farmers sought the key crop nutrient. Since early 2009 when prices peaked they have more than halved to around $400 per tonne in early 2013 as the key markets of India and China sought alternatives. 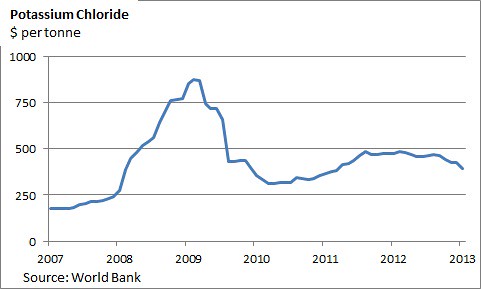 Rabobank explain that “Until recently, the potash market was mired in acute demand uncertainty and piling inventory levels across key consumption regions.” The report says that the near-term market has turned in favour of buyers giving them the opportunity to negotiate substantial discounts on 2013 contracts.

In the near term fertiliser buyers need to be wary of a rebound in prices. Indian and Chinese buyers may now return to the market to take advantage of lower prices. Meanwhile, following the drought in the US farmers have high cash levels and with the USDA raising the prospect of a record corn and soyabean harvest demand for fertiliser may be high.

With the potash market characterised by an oligopolistic market structure an increase in demand may well lead incumbent suppliers to increase prices once more.

In the longer term the current low prices (by recent historical standards at least) are proving a problem for new entrants into potash supply. According to Citigroup many of the new greenfield projects rely on a price of $450 per tonne to deliver satisfactory returns.

If new supply does come on the prospects for potash supply over the next few years prices could be even lower. CRU forecasts potash prices falling by around 15% in the period to 2017.